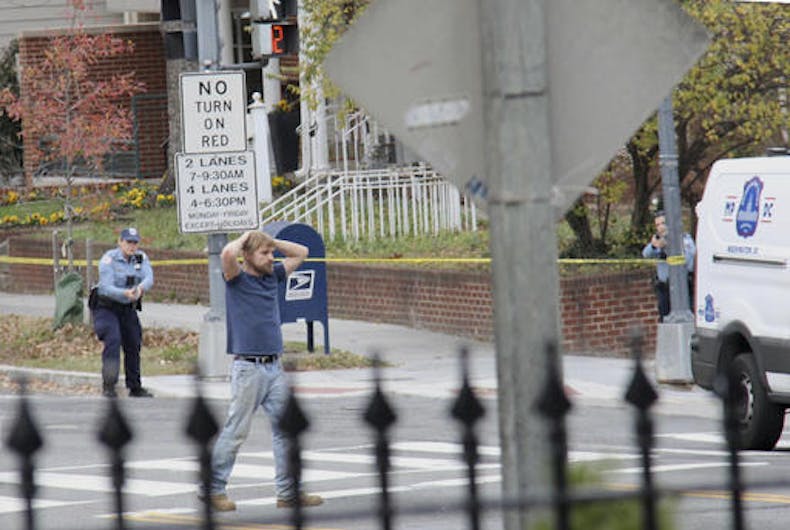 Edgar Maddison Welch, 28 of Salisbury, N.C., surrenders to police Sunday, Dec. 4, 2016, in Washington. Welch, who said he was investigating a conspiracy theory about Hillary Clinton running a child sex ring out of a pizza place, fired an assault rifle inside the restaurant on Sunday injuring no one, police and news reports said. Photo: (Sathi Soma via AP)

A man who said he was investigating a fake news story about Hillary Clinton running a child sex ring out of a pizza place was arrested after firing a rifle inside the Washington, D.C., restaurant, police said.

Edgar Maddison Welch, 28 of Salisbury, North Carolina, was arrested Sunday afternoon at Comet Ping Pong on Connecticut Avenue in an affluent neighborhood of the nation’s capital, police said. No one was injured in the incident.

Welch told police he’d come to the restaurant to “self-investigate” the fictitious online conspiracy theory that spread online during Clinton’s unsuccessful run for the White House, a police statement said.

Welch walked into the front door of the restaurant and pointed a gun in the direction of an employee, the police statement said. The employee fled and notified police.

Bartender Lee Elmore told news outlets that people in the restaurant started to panic as the man walked to the back of the restaurant.

“One of the hosts runs up and says did you see that guy? He had a big gun,” Elmore said.

“His demeanor was bizarre, in that if you come in to a place to eat, you ask for a host or grab a seat at the bar,” Elmore said. “Didn’t make any eye contact, didn’t talk with anybody.”

Two guns were recovered inside the restaurant and an additional weapon was recovered from the suspect’s vehicle, police said.

A phone number listed for Welch in North Carolina was disconnected.

The Comet Ping Pong is in a neighborhood of well-tended private homes and apartment buildings on leafy streets that lead to a mix of shops, restaurants and the Politics and Prose book store.

The restaurant gained notoriety during the presidential campaign after fake news stories stated Clinton and her campaign chief ran a child sex ring out of the restaurant, news organizations have reported.

“For now, I will simply say that we should all condemn the efforts of certain people to spread malicious and utterly false accusations about Comet Ping Pong, a venerated DC institution,” restaurant owner James Alefantis said in a statement. “Let me state unequivocally: these stories are completely and entirely false, and there is no basis in fact to any of them. What happened today demonstrates that promoting false and reckless conspiracy theories comes with consequences.”

Alefantis was in a relationship with former rightwing journalist turned Clinton supporter David Brock. The religious right has regularly claimed that gay men commonly engage in pedophilia despite overwhelming evidence that sexual child abuse is normally committed by heterosexual men. False claims that gay political candidates are involved in child sex abuse rings has been a common trope for Republican politicians for decades.

The conspiracy theory, first published on Reddit, starts by insinuating that the two men’s relationship is proof that the abuse is happening. The sentence reads, “Comet Pizza is a pizza place owned by James Alefantis, who is the former gay boyfriend of David Brock, the CEO of Correct The Record.”

Correct the Record is a pro-Hillary Super PAC designed to defend Hillary Clinton from baseless attacks.