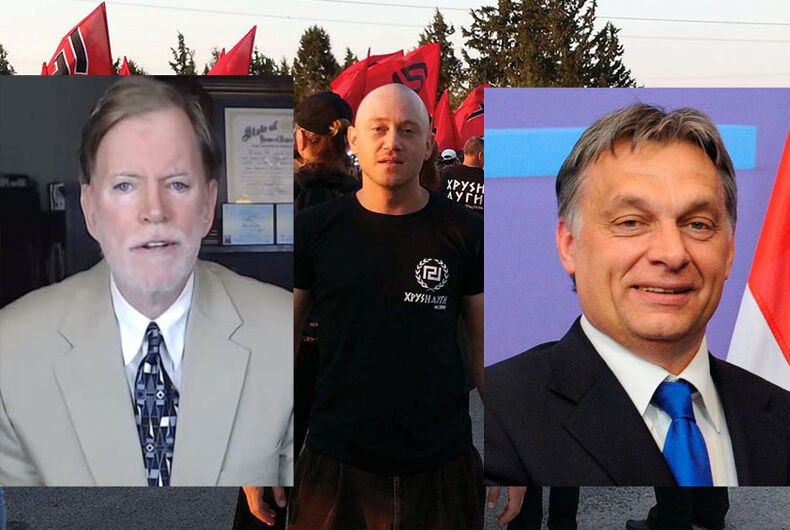 This likely won’t surprise you if you’re LGBTQ and have been following the campaign of Donald Trump, now the president-elect: racists, homophobes, Islamophobes, haters and anti-semites are genuinely ecstatic over his election. It’s like, they’ve got a hard-on for Trump so bad they are falling over themselves to celebrate their good fortune.

Here’s David Duke, the former Ku Klux Klan leader who ran for U.S. senator from Louisiana and netted 3 percent of the vote, or more than 58,500 ballots. He lost Tuesday, but with Trump in the White House, it’s clear he feels he won:

This is one of the most exciting nights of my life -> make no mistake about it, our people have played a HUGE role in electing Trump! #MAGA pic.twitter.com/HvJyiJYuVa

Then there are America’s Neo-Nazis. Andrew Anglin is editor of the Daily Stormer, and JoeMyGod shared his downright scary reaction to Trump’s victory, noting it fell on one of the saddest days in the Jewish community: the day in 1938 German Nazis set fire and destroyed Jewish homes and businesses, known as Kristallnacht, which is German for night of broken glass.

We won, brothers. All of our work. It has paid off. Our Glorious Leader has ascended to God Emperor. Make no mistake about it: we did this. If it were not for us, it wouldn’t have been possible.

We flooded the tubes, we created the energy, we made this happen. We were with him every step of the way. And the great news is, we’re going to be given credit for it. The media is finished. They are going to lash out. They will implode completely. History has been made.

Today, the world ended. A new world has been born. Anything is possible now. The future is wide open. Trump is a step toward our goal, not our actual goal, but he is a gigantic step.

All my friends in Europe are texting me “NOW WE’RE GOING TO GET TO KICK OUT THESE MONKEYS!!!!” Seriously, all caps texts, just like that.

We will now move into the next phase of our Great Work. Tomorrow, we troll. We have won so much. And it has led to the ultimate win. The battle is far from over. Much, much, much work to be done.

But the White race is back in the game. And if we’re playing, no one can beat us. The winning is not going to stop. Thank you all. I love you all. I am humbled to have had the honor of narrating this epic story for all of you amazing people. We won, brothers. Hail victory.

They too were trying to make their country “great” again.

The celebration is not limited to our shores. Hungary and Greece also hailed the election of Trump: the far-right Golden Dawn party in Athens called it a victory against “illegal immigration” and in favor of ethnically “clean” nations. Hungarian Prime Minister Viktor Orban sent his congratulations to Trump via Facebook, reported Reuters.

His post declared: “What a great news. Democracy is still alive.”

You can watch the statement from Greece’s Golden Dawn group below, from YouTube. Translation is provided:

With a Supreme Court vacancy to fill, who will Donald Trump pick?