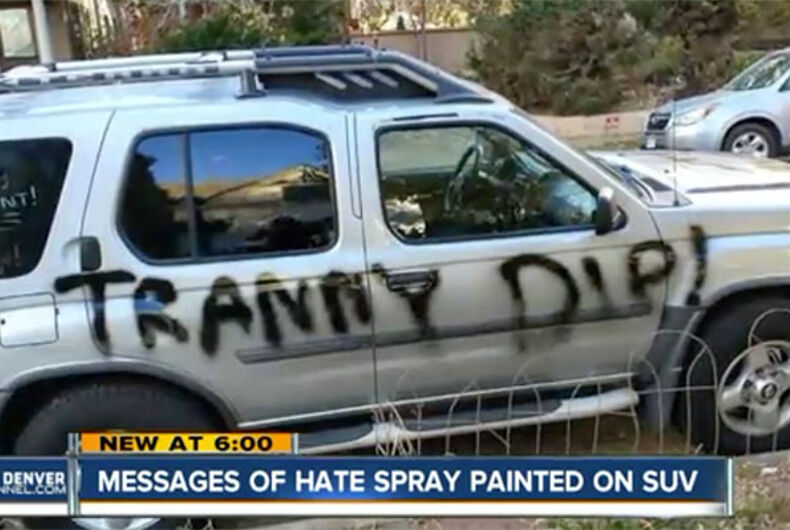 Police in Denver’s Capitol hill neighborhood are investigating a vile act of vandalism and hatred against a transgender woman. The sports utility vehicle belonging to Amber Timmons was spray-painted on all four sides with messages of hate, death threats, a swastika, slurs and a message in support of president-elect Donald Trump.

Timmons posted photos of the damage to her SUV on Facebook:

“I got up this morning to go to work and the car was parked a couple of doors down. I came out and was surprised to see it all covered in graffiti and hate messages,” Timmons told KMGH-TV.

As word of the vandalism spread, someone claimed Timmons did this herself, going so far as to claim they had surveillance video to prove she bought the spray-paint. Facebook removed her post after receiving those complaints, something that made Timmons feel victimized all over again.

Timmons insisted to KMGH that this was not her doing. “Why would I do this to myself? Why would I paint that type of hatred messages against myself? That’s absurd,” she told the station. “I would not subject myself to this type of fear and this type of insecurity that it did bring to me this morning, plus my friends.  I wouldn’t put my friends through that either.”

A swastika was painted on the back tailgate, and on the other three sides of the SUV were the words: “fag,” “die he she,” It!!” “tranny die,” and “Trump.” KMGH-TV reported that prior to the vandalism, Timmons’ SUV had been marked with the words, “Not My President.”

“Considering that it had ‘Trump’ all over my front hood, I think it’s directly related,” to the election, Timmons told KMGH. “Am I scared? Definitely,” she said. “But if I have to change my lifestyle, it means hate wins, and hate doesn’t win. Love wins.”

Fortunately for Timmons, neighbors, friends and even strangers responded with kindness, some leaving post-it notes of support:

Friends turned-out to scrub the hateful writing off her SUV to remove any trace of the disturbing, transphobic acts by the unknown vandals.

“We are successfully ERASING THE HATE!!!” Timmons wrote on social media, with a picture of her car being cleaned. “We are not going down… You fight hate with love… so whoever did this… I LOVE YOU!! And love to everyone out there who came to my support and love. Thank you so very much!!!”

Police took a report and told KMGH they are investigating three similar cases like this one, and she says they have no doubt this was the work of vandals.

“They went around to all the neighbors and talked to them because it happened so late at night,” Timmons told the station. “Nobody saw anything or knew anything.”

Watch the report from KMGH below and note that reporter Lance Hernandez somehow confused the “e” for a “p” in reading the graffiti that said, “Tranny Die.” I mean, “Tranny Dip?” Really?