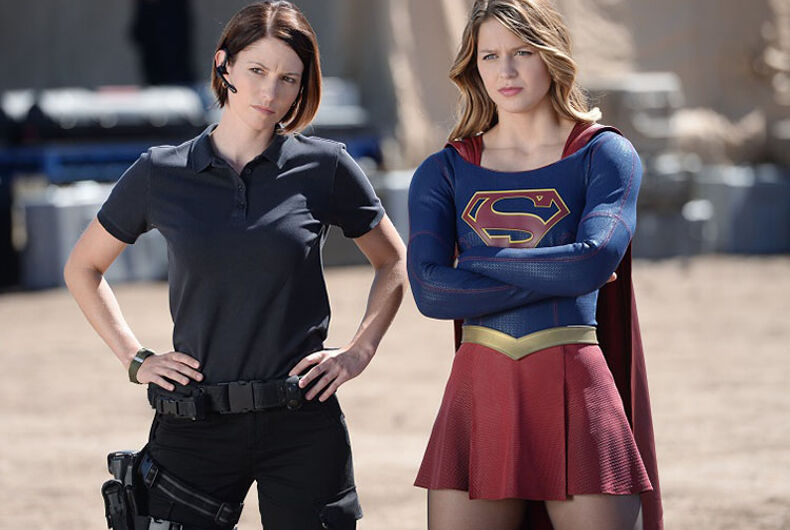 It’s the human closest to Kara Zor-El of Krypton!

Yes, Alex Danvers, played by Chyler Leigh, revealed on Monday’s episode of Supergirl on the CW Network that her adopted sister Kara isn’t the only one with a secret identity. She came out in the episode, “Crossfire.”

Executive producer Jeffrey Kreisberg told the Hollywood Reporter their goal is to tell Alex’s story in a “respectful, educational, entertaining and thoughtful” way, surrounded by supportive family and friends.

“The writers were foreshadowing for weeks,” says YouTube personality and Supergirl superfan Melody Maia Monet, a trans woman in Orlando, Fla. She guessed last week in an Instagram post that this was about to be revealed:

In the episode, detective Maggie Sawyer played by Floriana Lima gets dumped by her girlfriend, and mistakes Alex’s invitation to get drinks as asking her out on a date. Maggie tells Alex she didn’t realize that Alex was gay. Alex of course at first denies it and bolts, but after some soul searching she comes out as gay to Maggie by the episode’s conclusion.

“What I’m interested in, because I love Alex, is that I want Alex to be happy,” executive producer Andrew Kreisberg tells The Hollywood Reporter.

“There was always this sadness about her last season that I think we’re really getting underneath now. No one should ever feel like they’re trapped. No one should ever feel like they’ve got a secret inside of them. The idea that, in going through this, even if it is painful and rough going, that Alex is going to come out the other side a happier and more complete person, as someone who loves Alex Danvers so dearly like a sister, that she is going to go on this incredible journey makes me so happy.”

Click here to watch the episode from the CW.