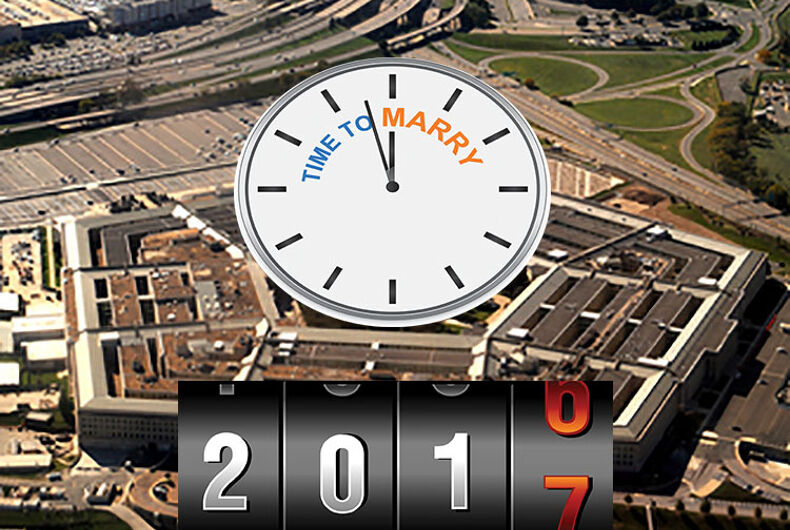 In a move that is sure to create pre-holiday season stress for unmarried LGBTQ couples who work for the U.S. military as civilians, the Department of Defense is preparing to announce as soon as this week an ultimatum that it claims is meant to ensure “that both same-sex and opposite-sex couples are treated on an equal basis,” according to Pentagon documents obtained exclusively by LGBTQ Nation.

The plan, according to the information prepared by the DoD, offers those who cannot plan, organize and commit to a wedding by New Year’s Eve the military equivalent of COBRA, known as Temporary Continuation of Coverage, or TSS. The only hitch is that these papers show those choosing this option “will be responsible for 100 percent of the premium payments.”

The documents, one titled Phase-Out of DoD Benefits for Civilian Employees’ Same-Sex Domestic Partners and their Dependents, and the other, an FAQ titled Phased End to Same-Sex Domestic Partner (SSDP) Benefits, outline what will happen in a little more than seven weeks. On January 1, those benefits will cease to exist for civilian employees across all six military branches, as well as Non-Appropriated Funds employees, or NAF, who are federal workers paid not by Congress but through other means.

This proposal, when compared with similar action by the State Department, leaves a very small window for couples to wed.  Although the DoD documents show a planned deadline of December 31, the State Department’s same-sex benefits “will begin phasing out December 14, 2015 and terminate officially on September 30, 2018,” according to State records.

The U.S. military’s policy on same-sex domestic partner benefits was outlined in a groundbreaking memorandum by outgoing Secretary of Defense Leon Panetta in February 2013, months before the historic U.S. Supreme Court ruling striking down the Defense of Marriage Act. Secretary Chuck Hagel revised the benefits after that decision, United States v. Windsor, making it clear “the same benefits currently available to heterosexual spouses are also available to same-sex spouses” and “to extend benefits to same-sex domestic partners” in keeping with the Obama administration policy set forth in 2010. The motivation to phase-out those SSDP benefits, according to the documents, is the high court’s landmark marriage equality ruling last year, on the two-year anniversary of the day DoMA was declared unconstitutional:

“The June 26, 2015, Supreme Court decision in Obergefell v. Hodges legalized same-sex marriage throughout the United States. This law permits same-sex couples to marry and to have access to the same basic rights and federal and other employment benefits afforded to opposite-sex couples who choose to marry.”

“SSDPs of Federal employees may choose to marry their Federal employee partners on or before December 31, 2016, to continue receiving all previously authorized benefits.”

The DoD in its FAQ document addresses a question that many same-sex civilian military employees will likely ask: “Is the Department forcing me to make a choice between marrying my SSDP and keeping the benefits?” The answer, is yes: