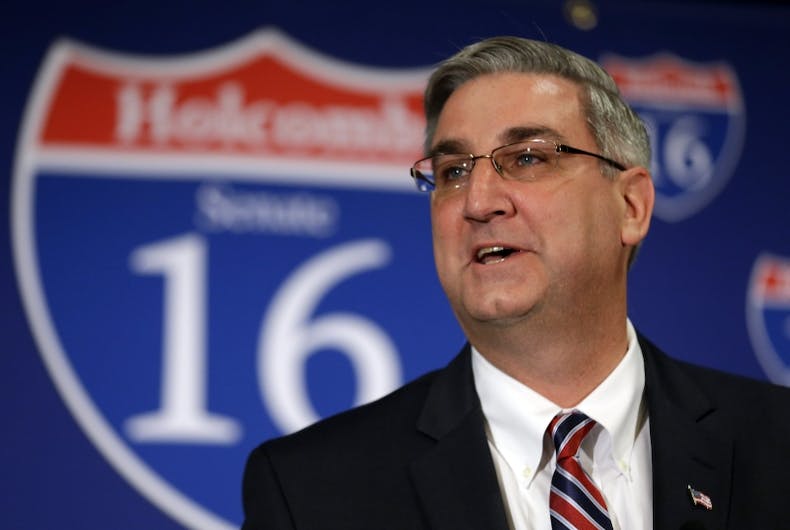 Holcomb was not well known around the state when he became the Republican candidate in July, about five months after Pence appointed the former state GOP chairman as lieutenant governor.

Gregg’s campaign aimed to link Holcomb to controversies during Pence’s term such as Indiana’s 2015 religious-objections law that sparked a national uproar from gay-rights supporters.

Thrust into the campaign in late July, Holcomb had to sprint around the state introducing himself to voters. To deflect Gregg’s criticism on social issues, Holcomb has stressed economic bright spots such as a $2.4 billion state budget surplus, an unemployment rate of only 4.5 percent, recent tax cuts and the state’s AAA credit rating.

Gregg, a former Indiana House speaker, congratulated Holcomb on his victory and said it was likely his last time on an election ballot. Gregg cited Trump’s landslide win in the state and Republican victories in the U.S. Senate race and other statewide races as making his race an uphill climb.

“It was tough with what happened in the state with the landslide that came across Indiana,” Gregg said in his concession speech.

Gregg had attacked Holcomb as a “rubber stamp” for Pence, citing Holcomb’s support for the religious-objections law that critics said sanctioned discrimination against gays and lesbians. A centerpiece of Gregg’s campaign is to extend state civil rights protections to gay, lesbian, bisexual and transgender people.

Holcomb said the state hasn’t suffered lasting economic harm from the religious-objections law. He said the Republican-dominated General Assembly is unlikely to advance an LGBT rights bill after a compromise attempt failed during this year’s legislative session.

“I mean, we’re fiscally responsible. We owe that to the previous governors we had,” Paxton said. “We need accountability across the board. County, state and national.”

Pence’s decision to drop his re-election bid means Indiana will have a one-term governor for the first time since the state constitution was changed in the 1970s to allow governors to seek a second consecutive term.

Holcomb, 48, has mostly been a behind-the-scenes political operative, including chairman of the state Republican Party. He spent 10 months running for this year’s Republican U.S. Senate nomination, but had little fundraising success. He dropped out when Pence picked him to become lieutenant governor in March, after Pence’s 2012 running mate, Sue Ellspermann, resigned to take a university job.

Gregg, 62, had been out of public office since stepping down as Indiana House speaker in 2002. He has since worked as interim president of Vincennes University and as a partner with an Indianapolis-based law firm.