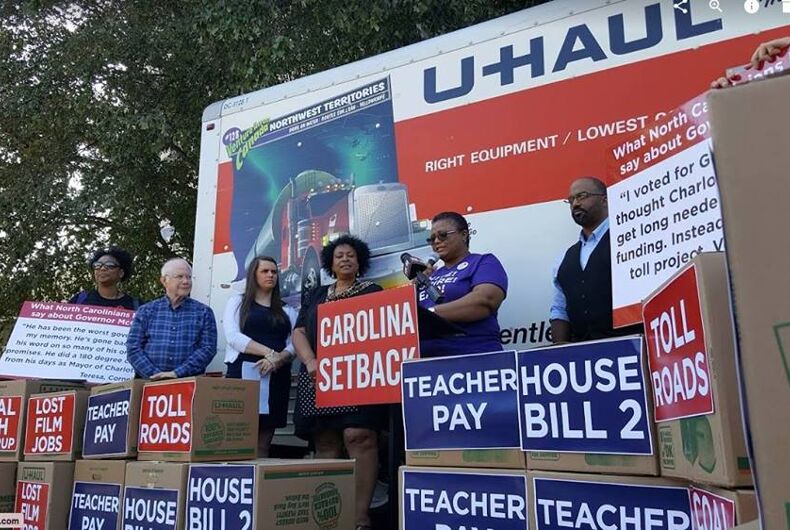 Progressive leaders are calling on Gov. McCrory to concede to Cooper.Photo: Facebook

Gov. Pat McCrory has formerly requested a statewide recount in the North Carolina’s governor’s race, as he trails his Democratic opponent Attorney General Roy Cooper by less than the 10,000 votes required to prevent it.

The votes are still being tallied and the McCrory camp said in a statement that they are aware the recount cannot happen until after that is done but wished to beat a deadline in the state. He is down by over 6,000 votes according to the State Board of Elections website.

Cooper, who has already named key members of his transition team and is claiming victory, tweeted out a statement from campaign manager Trey Nix, calling the move a “last-ditch effort from Governor McCrory to delay and deny the results of this election.”

Members of Progress North Carolina, Equality NC and the Human Rights Campaign held rallies on Tuesday to tell Gov. Pat McCrory that it is time to move on.

The organization held two rallies calling on McCrory to concede to Cooper, one in Charlotte at the Government Center and one in Raleigh at the North Carolina Executive Mansion where McCrory resides.

There are also concerns that the Republican controlled North Carolina General Assembly could get involved in determining the outcome, which the state’s Constitution appears to allow.

“I do think the likelihood [of the NCGA getting involved to determine the outcome of the election] is low at this point, but I have been surprised many times this year,” said Matt Hirschy, director of advancement at Equality NC. “And I am certainly never surprised at the bounds to which the General Assembly will go to do unconstitutional and crazy things. So while the North Carolina Constitution does provide a provision for them to step in and appoint a governor, I think they should let the people speak and let the rule of law in this election stand as it is.”

“The number one message that we have is, Gov. McCrory, it is time to move on from this petty and partisian rhetoric that you’ve got around this poor excuse for trying to rig an election in your favor,” Hirschy said, adding that he is no longer needed in Raleigh and it is time to let Cooper take office. “McCrory needs to drop his filing for a recount and he needs to concede.”

Matt Hirschy of @equalitync in Charlotte talks NC Gov. McCrory calling for a statewide recount. Asks him to #MoveOnMcCrory. pic.twitter.com/1CbWjHzqty

While Republicans Donald Trump and Sen. Richard Burr managed to win in the state, McCrory saw his approval rating plummet after he signed anti-LGBTQ law House Bill 2 (HB2), costing the state thousands of jobs and millions of dollars and showing that going after the LGBTQ community can have electoral consequences.

Watch the Progress NC, Equality NC, and HRC held rally in Charlotte, where McCrory was mayor before becoming governor, below.

Watch the rally held in Raleigh in front of the Executive Mansion.