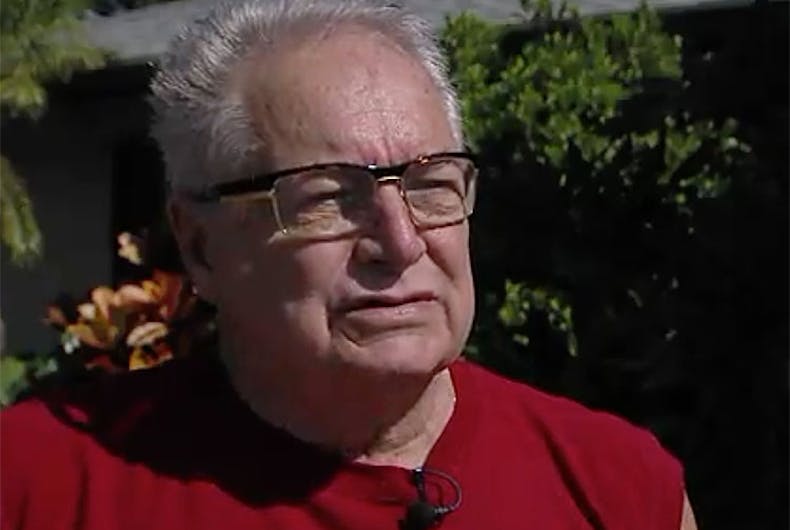 A senior citizen in Sarasota, Fla., says a stranger physically attacked him because he’s gay, and cited president-elect Donald Trump as sanctioning the abuse.

“He kept saying, ‘You know my new president says we can kill all you faggots now,'” according to 75-year-old Chuck Redding. “It’s absolutely horrendous,” he said.

Redding told WFTS-TV the person targeted him because of the stickers on the back of his car, one for Human Rights Campaign and the other a rainbow sticker for marriage equality. According to Redding, the man in the dark-colored Jeep followed his car, right on his bumper, all the way to the street where he lives.

“This guy was extremely close to me. At first, I didn’t think anything of it other than it was a jerk that was following too close,” Redding told the station. That’s when, he said, “I knew then something was wrong.”

As a precaution, he parked his Mazda sedan in front of a neighbor’s house. But as soon as he stopped, the driver of the Jeep left his vehicle and started banging on Redding’s window.

“He yanked the door open, dragged me out, ripped my shirt. I was on the pavement,” said Redding.

The man badly bruised his arm and left him with cuts to his knee, toe and one hand, which is swollen to twice its normal size.

Redding, who is out, says he’s never been attacked like this, and has decided to better protect himself. He said he and several friends are applying for conceal carry gun permits, and encouraging others to do the same.

“If I can carry a weapon in my waistband, so that it can be seen at least, maybe these people will think different,” Redding told WFTS.