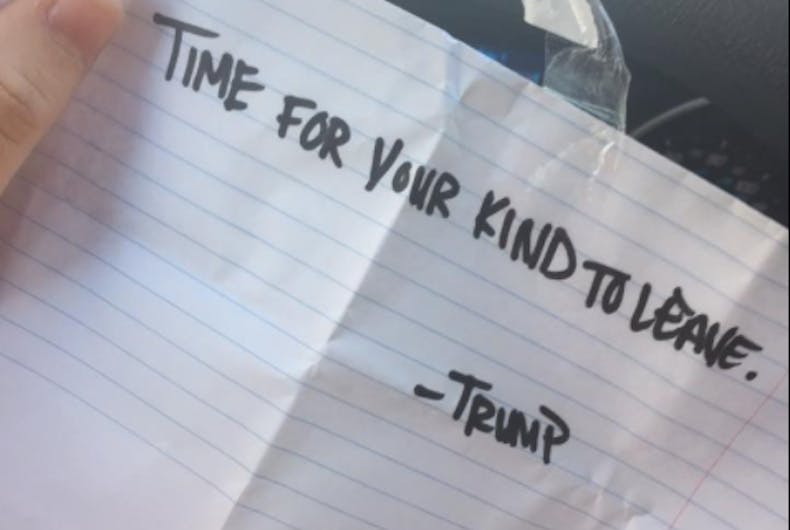 A lesbian couple in Ridgefield, Washington say they found this note taped to their door following the election.Photo: Via Facebook

Hundreds of people have reported instances of hate-based harassment and intimation following Tuesday’s election of Donald Trump, according to the Southern Poverty Law Center.

The incidents included anti-Black, anti-immigrant, anti-Muslim, anti-woman, and anti-LGBTQ harassment, as well as a few cases of anti-Trump harassment. Not all incidents could be immediately independently verified by the group.

My 12 year old daughter is African American. A boy approached her and said, “now that Trump is president, I’m going to shoot you and all the blacks I can find”. We reported it to the school who followed up with my daughter and the boy appropriately.

As well as anti-immigrant sentiments:

“Build a wall” was chanted in our cafeteria Wed at lunch.”If you aren’t born here, pack your bags” was shouted in my own classroom. “Get out spic” was said in our halls.

And then there was was the misogyny:

“Death to Diversity” was written on a banner displayed on our library for people to see, as well as written on posters across campus. As well as white males going up to women saying that it was now “legal to grab them by the pussy”.

The most common location for election-related harassment was K-12 schools and colleges and universities. But drive-by harassment was also a frequent complaint:

Today a young Latino man in is 20’s, and a co-worker of mine, was walking into work as a truck slowed down and two white men threw a bag of garbage onto him and yelled, “you are going back to where you came from” and drove off. This was in Austin, a very liberal and progressive city. I am shocked and appalled that this happened.

SPLC says the reports have been decreasing and that it plans to issue an update next week. To report election-related harassment, visit SPLC’s Hate Watch site.