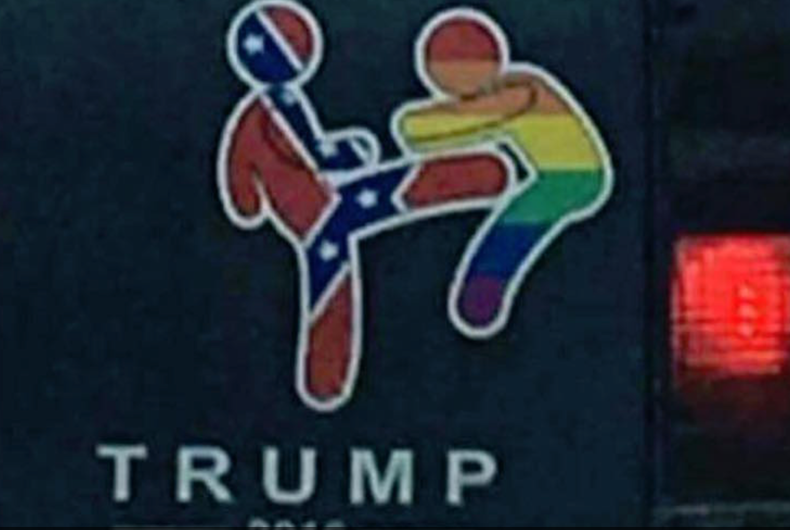 A photograph of a car featuring a bumper sticker of a confederate flag man kicking a rainbow flag man atop a separate Trump 2016 sticker has gone viral.

It has been reported that the decal and its opposite, a rainbow flag man kicking a confederate flag man, was available for purchase from FastDecals.com. While a Google search for “LGBT Rainbow Flag Kicking Confederate Flag Decal” brings up a FastDecals.com page, when you click on it, it says the search doesn’t match any items. So it seems they have stopped selling these decals.

While some falsely believed the two stickers were one, it is clear that this is not the case. The Trump 2016 sticker is separate.

While Trump has tried to sell himself as the better option for LGBTQ people, his choice of vice presidential running mate, as well as the anti-LGBTQ platform they are running on, calls that into question.

Trump has also signaled support for the discriminatory First Amendment Defense Act, as well as for North Carolina’s HB2, which invalidated non-discrimination ordinances that offered protections to the LGBTQ community.

He has also said he is in favor of overturning same-sex marriage.

The sticker was reportedly seen in Orlando, where 49 people were killed and dozens more injured in the LGBTQ club Pulse.