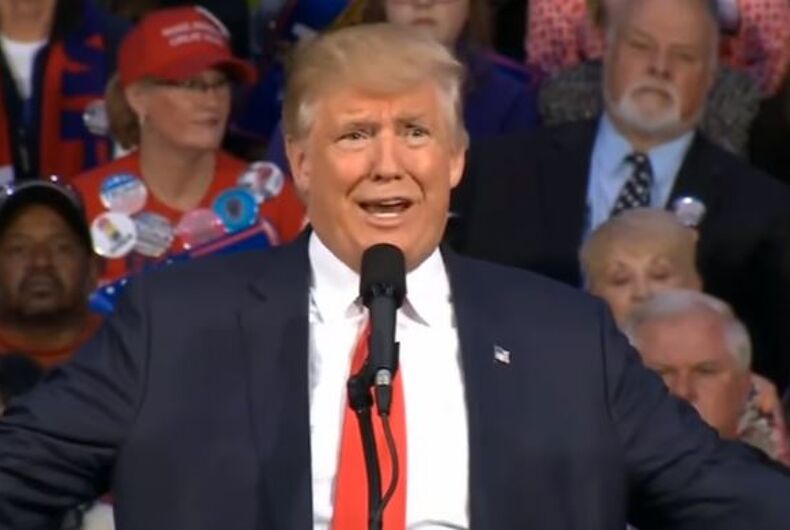 Donald Trump is still reeling from the release of the 2005 “Access Hollywood” video, known as the Trump Tape, showing him bragging about committing sexual assault. There have been murmurs that more damning tapes are out there that could hurt his already severely damaged campaign even more.

In a rally the day after the second presidential debate, Trump himself admits that more tapes may be coming, and tries to get out ahead of it, downplaying its potential significance.

Trump goes on to talk about his press event with three women who have accused Bill Clinton of sexual misconduct, as well as a fourth woman who was raped by a man that Hillary Clinton defended, after unsuccessfully attempting to avoid taking the case, during her time as a defense attorney.

An alleged transcript from an unaired segment of “The Apprentice” is now making the rounds, which shows Trump making disparaging remarks about the looks of one of the contestants on the show.

A former producer on the show, Bill Pruitt tweeted that there were “much worse” tapes out there than the one from 2005 where he brags of sexual assault. It is hard to imagine what could top it.

As a producer on seasons 1 & 2 of #theapprentice I assure you: when it comes to the #trumptapes there are far worse. #justthebegininng

One tape reportedly has Trump using the n-word.

This election year will not go quietly into that good night, and neither will Donald Trump. Thinks will likely, somehow, get crazier before it is all said and done.

Mark Burnett, the creator of “The Apprentice,” and MGM, the company that owns the rights to the show, as well as “Celebrity Apprentice,” have released a statement to Variety saying they will not release any footage:

MGM owns Mark Burnett’s production company and ‘The Apprentice’ is one of its properties. Despite reports to the contrary, Mark Burnett does not have the ability nor the right to release footage or other material from ‘The Apprentice.’ Various contractual and legal requirements also restrict MGM’s ability to release such material. The recent claims that Mark Burnett has threatened anyone with litigation if they were to leak such material are completely and unequivocally false. To be clear, as previously reported in the press, which Mark Burnett has confirmed, he has consistently supported Democratic campaigns.

Watch Trump admitting more tapes might come to light below.