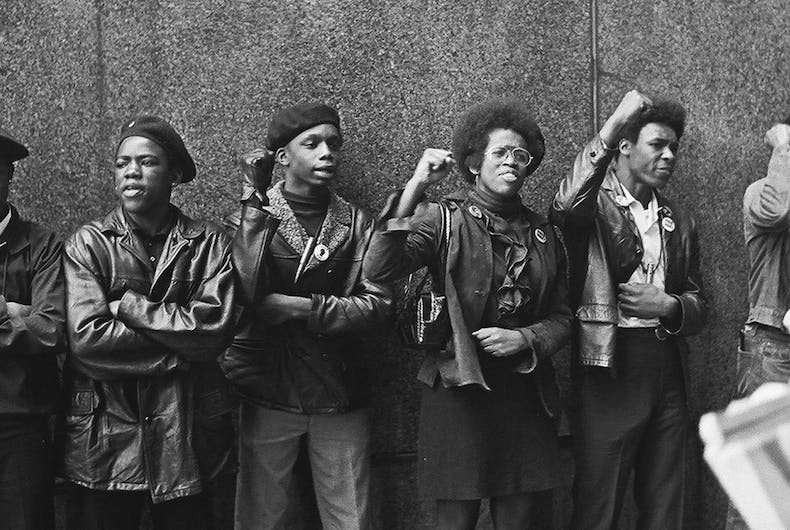 Many people like to criticize the Black Panthers by saying that they were racist, sexist, and/or homophobic, but this is just an attempt to delegitimize one of the most revolutionary organizations this country has ever known. White people especially hold onto these claims and ignore the many social programs that the Panthers provided: health care, free breakfasts for kids, clothing distributions, police patrols . . . the list goes on. This post is not going to be a summary of all the things that the Panthers did for their community. This post is meant as a response to those who would slander the Black Panthers with charges of homophobia and sexism.

The great African American educator and civil rights leader Mary McLeod Bethune (1875-1955), a major force in the Black women’s club movement in the 1920’s and 30’s, called on women to “go to the front and take our rightful place; fight our battles and claim our victories.” Women tried to do this in the heyday of the Black Liberation movement, as well as during the Civil Rights movement, with varying degrees of success. In these movements, women generally were relegated to subordinate roles and were virtually invisible within the hierarchy of the organizations, even though they provided the bulk of memberships and labor. . . .

It is with a focus on these macho and misogynist attitudes that much of the popular press has examined the role of Black women in the Black Panther Party. in The Shadow of the Panther, Hugh Pearson, who had no discernable background in the Black Liberation movement, and therefore no firsthand knowledge of what he wrote, damned the Black Panther Party’s “routine” mistreatment of women as both wide-ranging and “flagrant.” Peterson relied on three BPP insiders, “those who would never forgive Huey for what he did to the party,” and on “nonblacks who had been affiliated with Newton and the party,” whom he found to be the “easiest” sources for him to interview. It is not surprising that he comes to flawed conclusions upon these limited and biased sources. . . .

While it may be proper to be sharply critical of the Black Liberation movement generally, it is also proper to give credit where credit is due. For the undeniable truth is that the Black Panther Party, for ideological reasons and for reasons of sheer survival, gave the women of the BPP far more opportunities to lead and to influence the organization than any of its contemporaries, in white or Black radical formations. . . .

And point seven of the BPP 8 Points of Attention in the Party’s rules states, “Do not take liberties with women,” showing an awareness that sexual misconduct must be confronted within the Party. Kathleen Cleaver writes, “In 1970 the Black Panther Party took a formal position on the liberation of women. Did the U.S. Congress make any statement on the liberation of women? . . . Did the Oakland police issue a position against gender discrimination?” (p. 159-162)

The Panthers didn’t just talk the talk in regards to gender equality, they walked the walk. Women were in key leadership positions at all levels of the organization. The most prominent ones, of course, were Tarika Lewis, Kathleen Cleaver, Ericka Huggins, and Angela Davis.

Abu-Jamal goes onto say that:

This is not to suggest, but any means, that sexism was not a serious problem in the Party, nor that it did not hamper Party growth, development, and maturation. What is clear, however, is that sexism did not exist in a vacuum. As a prominent feature of the dominant social order, how could it not exist in a social, political formation that was drawn from that order, albeit from that order’s subaltern strata? (p. 165)

Just as sexism must be viewed within the broader social context of the time, we have to examine homophobia from the same lens. To echo Abu-Jamal, homophobia was and is a part of the dominant social order. How, then, can we expect that the rank and file members of the BPP could emerge spotless from that environment? The fact is, however, that Huey Newton did take a stand in favor of gay rights in 1970 when he issued “A Letter from Huey Newton to the Revolutionary Brothers and Sisters about the Women’s Liberation and Gay Liberation Movements” in the BPP’s newspaper.

We must gain security in ourselves and therefore have respect and feelings for all oppressed people. . . . Remember, we have not established a revolutionary value system; we are only in the process of establishing it. I do not remember our ever constituting any value that said that a revolutionary must say offensive things towards homosexuals, or that a revolutionary should make sure that women do not speak out about their own particular kind of oppression. As a matter of fact, it is just the opposite: we say that we recognize the women’s right to be free. We have not said much about the homosexual at all, but we must relate to the homosexual movement because it is a real thing. And I know through reading, and through my life experience and observations that homosexuals are not given freedom and liberty by anyone in the society. They might be the most oppressed people in the society. . . .

The Black Panthers were by no means perfect. But they offered the best alternative to the status quo and I am positive that if the FBI hadn’t spent so much time making members distrust each other with their COINTELPRO tactics, the BPP could have done even more amazing things.

Which is exactly why the government had to destroy the movement. Because it was revolutionary.