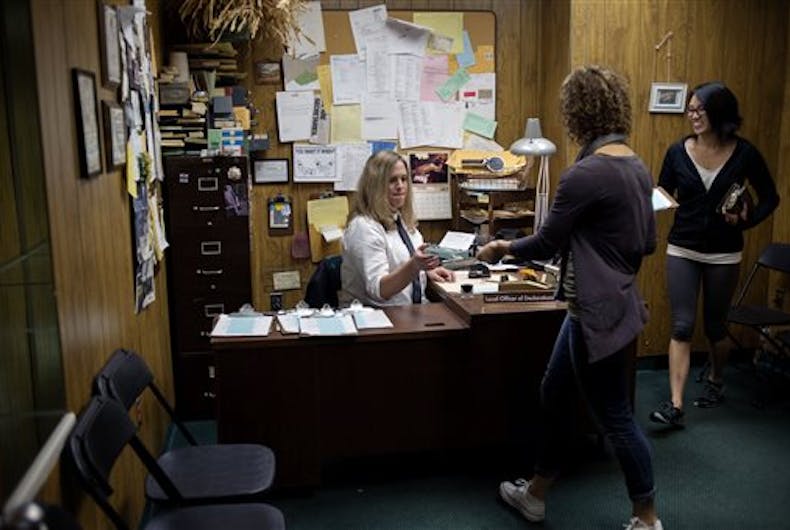 Ellie Webster of Grand Rapids works as the Local Officer of Declarations as Alexis Furney, center, and Kaleigh Hammond pass in their declaration sheets at "The Bureau of Personal Belonging" by Stacey Kirby at during ArtPrize Eight, Friday, Oct. 7, 2016 in Grand Rapids, Mich. A serious of wooden sculptures depicting wounded service dogs has won one of two $200,000 grand prizes at an international art competition in western Michigan. Art experts chose Stacey Kirbys The Bureau of Personal Belongings interactive performance and installation for the juried award. Photo: Neil Blake/The Grand Rapids Press via AP

An additional $100,000 in prizes was split among the top entries in various categories.

Mellick’s project is a traveling exhibition that’s intended to raise awareness about the sacrifices made by wounded veterans and their needs.

“It’s gonna sink in after a while. I’m elated,” said Mellick, 69, of Milford Center, Ohio.

His wooden carvings of dogs are used as parables and “usually about something else than what they appear,” Mellick said. “These are metaphors for their human handlers. The injuries that the dogs represent are more human than they are canine.”

Mellick says he’s going to donate some of his winnings to an organization that rehabilitates dogs from shelters and trains them to be companions for returning soldiers who suffer from post-traumatic stress disorder or brain damage.

“This piece is really about such a tight relationship between a dog and soldier that they become one,” he said.

Kirby’s piece allows visitors to interact with performers who are part of an office setting. The installation critically looks at how government works and pushes viewers to trust in their ability to impact how their communities are shaped.

“It’s an incredible experience to win such a large amount of money as an artist,” said Kirby, 40, of Durham, North Carolina. “It’s such a huge honor to have the funding to continue to do the work that I’ve been doing.”

She sees “The Bureau of Personal Belonging” as empowering people to share their voices whether or not they think it matters.

It encompasses a number of areas that include civil and lesbian, gay, bisexual and transgender rights, Kirby said.

“A lot of people feel frustrated, and we don’t feel like we’re being heard,” she said. “I feel like I meet everyone at a different level in their comfort zone. I hope they will engage with me and try to find a place where they can express themselves.”

“Whatever your views on war, patriotism, identity or belonging, both works drew you into an immersive and profound experience,” Gaines said.

More than 1,450 artists from 44 countries and 40 U.S. states entered this year’s ArtPrize competition. Their works were displayed publicly throughout Grand Rapids over 19 days.

The venues will remain open through Sunday evening.