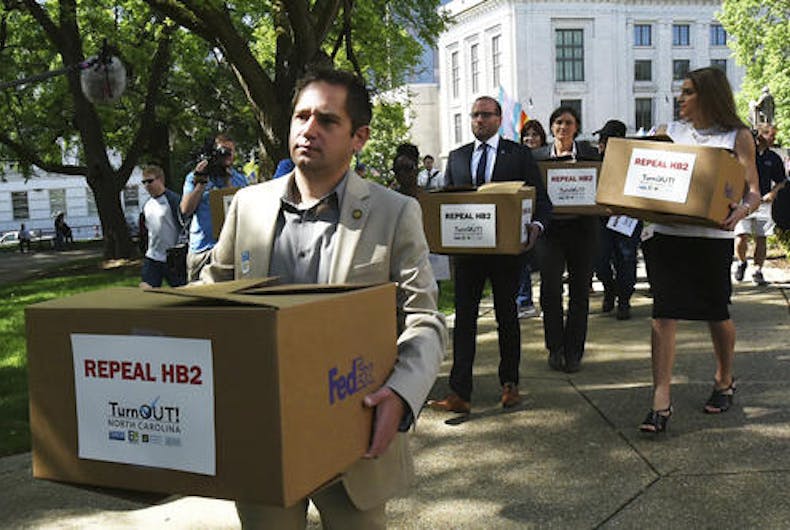 FILE - In this April 25, 2016, file photo, State Rep. Chris Sgro, D-Guilford, who is also executive director of Equality NC, leads a group carrying petitions calling for the repeal of House Bill 2 to Gov. Pat McCrory's office at the state Capitol building in Raleigh, N.C. As North Carolina has a bit of an identity crisis, its election for governor and even president will be a referendum on the state’s right turn and contentious new laws. "North Carolina IS a progressive state," insists Sgro. "What really happened is that in a low-turnout year, Democrats lost in 2010, and Republicans slammed our state with the worst possible redistricting that turned everywhere in the state into unwinnable conservative districts." Photo: Chuck Liddy/The News & Observer via AP, File

GREENSBORO, N.C. (AP) — The Tar Heel State is having a bit of an identity crisis.

Democrats outnumber registered Republicans by more than a half-million voters. Yet the GOP has controlled the General Assembly for six years — with supermajorities in both chambers most of that time — and has pushed through a conservative agenda that has slashed taxes, redrawn voting districts and even banned the removal of Confederate monuments without legislative approval.

North Carolina is also dealing with an image problem. Once hailed as a beacon of the New South, it has become something of a pariah state for many, thanks largely to a new law dictating which bathrooms transgender people can use.

In a widening protest, the state has been put on a no-fly-to list by several city and state governments, and it has lost business prospects and rock concerts. Perhaps worst of all in this basketball-obsessed place, it has lost NCAA tournament games — all over House Bill 2, dubbed by opponents as “Hate Bill 2” or simply “the bathroom bill.”

“We are no longer viewed as a progressive state but a backwards one,” Mayor Harold Weinbrecht of Cary said in early September after the collegiate sports organization announced that it was pulling four events from the liberal town — whose name, the joke goes, is an acronym for “Containment Area for Relocated Yankees.”

Of course, there are two people who can’t seem to get enough of North Carolina. Donald Trump and Hillary Clinton have visited so often in recent months that they’re practically part-time residents. Leading up to the Nov. 8 general election, the GOP and Democratic presidential nominees are in a tight race in the state, perhaps not surprising for a place that has always been something of an enigma.

Banking built the soaring skyscrapers of Charlotte; in Winston-Salem, it was tobacco that raised the skyline. A former textile and furniture manufacturing powerhouse, North Carolina has built an international economy based on higher education, finance and cutting-edge technology.

But the state is a mix of Nasdaq and NASCAR. It has an agrarian heart; only Texas has more rural residents. And it is still coming to terms with a past that allowed a state-funded eugenics program to flourish well into the 1970s and has provided fertile ground for the Ku Klux Klan.

Of the roughly 6.7 million North Carolinians registered to vote this fall, 2.6 million identify as Democrats, compared with 2 million Republicans. Still, nearly as many — just under 2 million, or about a third of those registered — list themselves as unaffiliated. That makes the state neither stereotypically liberal nor conservative, says political scientist Chris Cooper.

“Of all the states that went for Obama in 2008, we went for him by the smallest margin,” says Cooper, who teaches at Western Carolina University. “So we were kind of the reddest blue state in the country. Four years later, we’re the bluest red state in the country,” tipping to Republican Mitt Romney.

The upcoming elections for governor, U.S. Senate and even president are all referenda on the path that North Carolina has followed these past half-dozen years.

Embedded in the pavement in front of the Legislative Building in Raleigh is the state seal, encircled by its Latin motto: Esse Quam Videri — “To be, rather than to seem (to be).”

Many say things are not as they seem.

Backed by groups such as Real Jobs NC and Civitas Action that were funded in part through entities linked to wealthy conservative donor Art Pope, Republicans took advantage of a disorganized state Democratic Party in 2010 to sweep into power, gaining control of both legislative chambers for the first time since Reconstruction. One of their first actions was to schedule a ballot initiative that led to a constitutional amendment banning same-sex marriage.

In 2012, former Charlotte mayor and longtime Duke Energy employee Pat McCrory entered the governor’s mansion. What followed was a series of measures that steered what Cooper calls a “pretty middle-of-the-road state” to the extreme right. They included:

—A law requiring women to wait 72 hours before having an abortion, one of the longest waits in the country.

—Eliminating teacher tenure, although the courts later ruled it could apply only to future hires.

—Measures limiting early voting and requiring residents to present a photo ID at the polls.

Things came to a head earlier this year when, after giving their colleagues just 15 minutes to read it before opening debate, GOP legislators pushed through HB2 in a one-day special session. In addition to requiring people to use the restroom of the sex listed on their birth certificates in many public buildings, it excludes sexual orientation and gender identity from a statewide antidiscrimination policy and pre-empts any local measures that would offer wider protection. It also prevents local governments from increasing the minimum wage.

Republican leaders say they’re just doing what the voters elected them to do. Senate leader Phil Berger has cast his defense of HB2 as an ideological battle between North Carolinians and meddling forces from outside the state.

“Let me be clear. My job is not to give in to the demands of multimillionaire celebrities pushing a pet social agenda, liberal newspapers like The New York Times, big corporations who have every freedom to set whatever policies they wish under this law. My job is to listen to the people who elected us to represent them, and the vast majority of North Carolinians we’ve heard from understand and support this reasonable, common-sense law,” he told reporters in April.

However, a late September poll by Elon University showed about 56 percent of North Carolina voters say the law should be repealed, compared to 34 percent supporting it. The poll found 36 percent of voters identify themselves as moderate and 22 percent liberal, while 38 percent say they’re conservative.

Elon’s poll director, Jason Husser, said backlash over HB2 appears to have hurt McCrory, who was trailing slightly in the poll to Democratic challenger Roy Cooper, the state attorney general.

In the presidential race, the Elon survey gave a small lead to Clinton, while recent polls by Quinnipiac University and Bloomberg politics put the White House hopefuls in a virtual tie in the state.

LGBT activist Chris Sgro says these measures were not the will of the people, but the result of the GOP’s skillful use of gerrymandering to hijack the General Assembly.