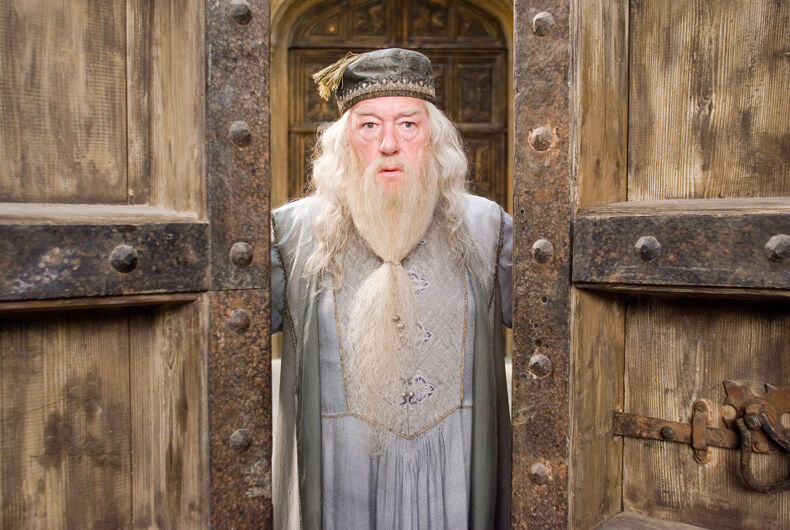 MICHAEL GAMBON as Albus Dumbledore in "Harry Potter and the Order of the Phoenix." Photo: Warner Bros.

Harry Potter fans may finally get the LGBT storyline they’ve been waiting for, without having to resort to fan fiction about the young wizard and his best friend, Ron Weasley.

The new Fantastic Beasts and Where to Find Them spin-off explores the wizarding world leading up to WWII, with an emphasis on wizards in the United States. But it also includes the gay patriarch Albus Dumbledore and his best friend, dark wizard Gellert Grindelwald.

The first installment of the anticipated five-movie series takes place 70 years before the first Harry Potter book, but author J.K. Rowling hinted at a plot line explore Dumbledore’s relationship with Grindelwald. Rowling has indicated in the past that Dumbledore was in love with Grindelwald, who turned out to be a dark and dangerous wizard — a sort of predecessor to the dark Lord Voldemort who is tied in the series to the rise of the Nazis.

“We do talk about Dumbledore and Grindelwald,” Rowling said at a recent film event in London, according the the BBC.

No word yet on who will portray the young Dumbledore, or how deeply the films will explore his relationship with and feelings toward Grindelwald.

“Grindelwald does feature in the background and is going to become a much more prominent feature moving forward,” director David Yates said at the same event.

Rowling has in the past confirmed that Dumbledore’s character is gay, and spoken to his romantic feelings for Grindelwald. The first film in the Fantastic Beasts and Where to Find Them series is due to be released November 18. Watch the trailer below.

Life
Dumbledore, Harry Potter, J.K. Rowling, Magical Beasts and Where to Find Them