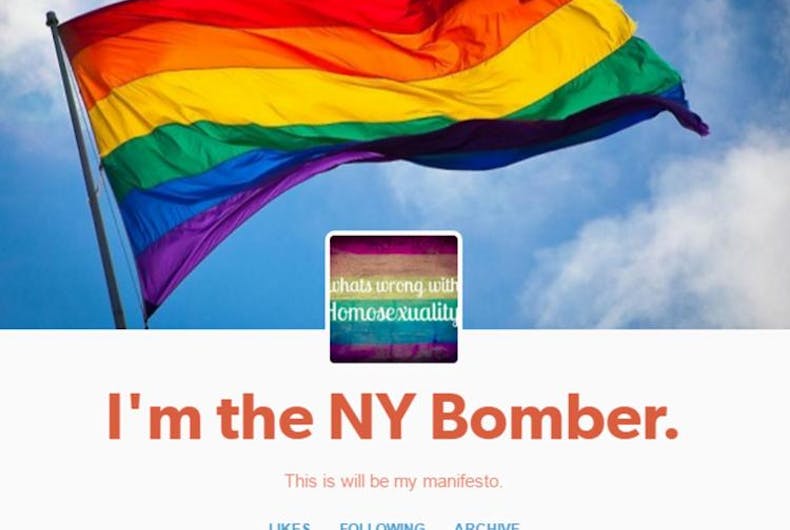 This screenshot is of a Tumblr account that reportedly claimed responsibility for an explosion in New York City that injured 29 people. Authorities are investigating the account's authenticity.

The New York Police Department is reportedly investigating a Tumblr account that claimed responsibility for the Saturday night bombing in Chelsea that injured 29 people, according to an unnamed police source quoted by the New York Daily News.

The account, which is no longer available online, reportedly contained rainbow flag and other LGBTQ imagery. The author, apparently a gay man, claims responsibility for the attack and writes that he is tired of living in a world where “homosexuals” are oppressed.

WGN-TV posted the full text of the posts. The station says that the account when down 45 minutes after its story went live.

“You probably have all seen the news by now, the explosives detonated in New York City, that was me. Those were just some tests, I know where I have made errors and I will not make the same mistake next time.

“I did it because I cannot stand society.

“I cannot live in a world where homosexuals like myself as well as the rest of the LGBTQ+ community are looked down upon by society.

“It is 2016 and we are still being viewed as mentally ill, sinners, attention seekers, and just plain weirdos in general. I am not going to stand by while under classed and underprivileged people are oppressed. I am not going to stand by while there is inequality in my country such as the racism being seen in white police officers all over the country. I am not going to live in a country where it is OK to have a misogynist, xenophobic, racist Islamophobic, republican candidate running for President of The United States! That’s implying that republicans in general should even be taken seriously as they are all cisgendered privileged white people.

“This is not the end, this is just the beginning. I will be remembered. I will make a difference. I will eliminate my targets before it is too late.”

A second post, titled “Taking a human life,” appeared to contemplate future actions and how far the alleged bomber was willing to go to be heard:

However, what I do know is that If I don’t do what needs to be done nobody will pay attention. LGBTQ+ people are much more likely to commit suicide than straight cisgendered people. It seems that nobody cares, however what if people from the LGBTQ+ community started lashing out in response to the violence and oppression we face with violence and possibly oppression? I’m sure that would give people a reason to not stand by while so many people are being oppressed. I suppose I’m just going to have to move forward knowing that what I am doing had a purpose and will in fact make a difference. I’ll keep you all posted.

Authorities have not confirmed the authenticity of the Tumblr posts, nor ruled out the possibility that they could be a distraction, a prank, or a ploy for attention. Many have also noted that the bombing took place in Chelsea, a neighborhood known being gay-friendly, which would make it an odd target for a gay perpetrator.

Most of those injured in Saturday night’s explosion suffered minor injuries, while one person suffered serious injuries. Mayor Bill de Blasio has called the bombing “intentional” but New York Gov. Andrew Cuomo said no links to international terror groups have so far been identified.

Police are also investigating a 911 call from a man claiming to have knowledge of future attacks, according to an unnamed source in the New York Post.

“I’m looking at the explosion down the block. There will be more,” the unidentified male allegedly said. The source added that the caller claimed to be standing at 23rd Street and Seventh Avenue, near the scene of the bombing.

The Post also reports that a handwritten note containing some Arabic was found inside a bag that held a second explosive device that did not detonate.

Authorities have not indicated they have a suspect or motive for the attack.