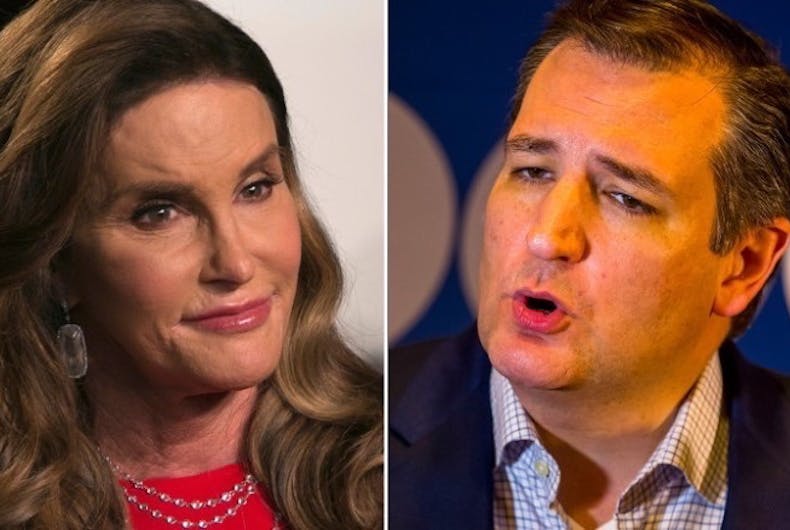 Caitlyn Jenner lobbied Republicans in Congress yesterday on behalf of the American Unity Fund, a Republican LGBT lobbying organization funded by GOP donors. But when she ran into Texas Senator Ted Cruz in the hallway, the acid-tongued politician who has spent months denigrating Jenner on the national stage became flustered and didn’t know what to say.

Jenner recounted the incident in a group meeting with current and former legislators and senior staff held during her visit to the Hill, according to exclusive sources in the room. She described the encounter as brief, saying she asked for five minutes of the Senator’s time to speak privately. Cruz’s staffers apparently came to the rescue and rushed the flummoxed Senator away, saying he was too busy to speak.

According to one witness to the run-in, Cruz didn’t give Jenner the cold shoulder, just a polite brush off.  “He was busy. She was busy. It was nothing more,” they said.

A Cruz aide who was also present at the encounter also denied Jenner’s description of events. He told LGBTQNation that Cruz was simply running late to a hearing.

“This account of events is not true. Senator Cruz and Caitlyn Jenner had a brief, but cordial conversation after running into each other in the hallway. There was no request for a meeting, and the Senator proceeded to his next appointment,” he said.

Shortly after coming out as a Republican, Jenner said during an interview that she would like to be Cruz’s “trans ambassador” if he won the presidency.

After North Carolina passed a law requiring transgender people to use the restroom that corresponds with the gender listed on their birth certificate, the candidate spent weeks denigrating transgender people during campaign appearances and in the media. When Donald Trump condemned the law, saying Jenner could use the bathroom at any of his properties without a problem, Cruz used the topic to attack his primary opponent.

“There have been very few complaints the way it is. People go, they use the bathroom that they feel is appropriate,” Trump said during the townhall debate. “There has been so little trouble.”

“Grown adult men, strangers, should not be alone in a bathroom with little girls,” Cruz responded on stage, calling his view “basic common sense.”

In a video posted online, Jenner mocked Cruz for his transphobia, showing herself entering a Trump property bathroom. Upon exiting she says, “Thank you Donald. I really appreciate it. And, by the way, Ted, nobody got molested.”

Trump has since reversed his position on the law and now supports it.

While Florida Representative Ileana Ros-Lehtinen talked to CNN about her personal meeting with Jenner, so far no other Republicans are willing to admit they met with the transgender Olympian. Ros-Lehtinen is a staunch supporter of LGBT equality; her son is transgender.

“She talked about her faith and her journey and how the Republican Party should be open to hearing these kinds of stories,” Ros-Lehtinen told CNN after the meeting. “Caitlyn is going to continue this outreach and I think it’s a positive message of love and outreach.”