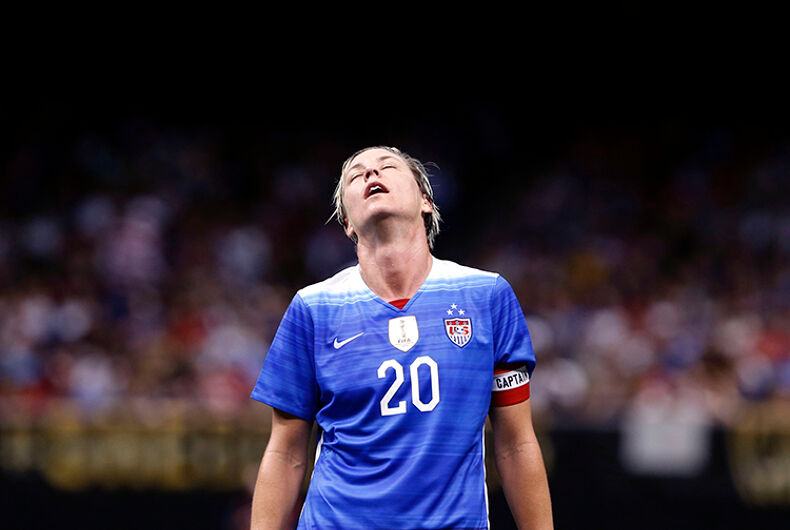 Retired U.S. Women’s soccer star Abby Wambach says she abused alcohol and prescription drugs for years until her arrest for driving under the influence in April.

“I was stubborn and I was in denial,” soccer’s most prolific international goal scorer told The Associated Press in a phone interview. “I didn’t want to face the truth.”

In “Forward,” her memoir set for release on Tuesday, the retired U.S. national team star recounts her career, from the lows of losing her high school championship to the highs of winning the Women’s World Cup last year. She also chronicles her high-profile marriage to fellow soccer player Sarah Huffman and the struggles they faced.

And she tells of her bouts with vodka and pills, which included Vicodin, Ambien and Adderall.

Chapters in the book are words that she has been labeled: tomboy, captain, lesbian, and yes, addict.

“That night getting arrested was one of the best things that has ever happened to me. Because if I don’t get so publicly shamed and publicly humiliated, I don’t think I wake up,” she said as she prepared for a book tour. “I think I was asleep for a lot of years. Asleep to the pleas from my family and friends, and even myself, to get help. So that night I was humiliated enough to wake up.”

With 184 goals, Wambach is the leading career scorer — male or female — in international soccer. She retired in December after 15 years with the U.S. women’s national team.

She says she has been sober since the night she was pulled over in Portland, Oregon, after dinner with friends. It was her rock bottom: Her mugshot was everywhere the next morning.

This was not what she imagined her legacy to be.

Wambach said that night was a culmination of events as her life spiraled out of control. Her marriage was on the rocks, she was wrestling with her retirement and her direction, and she had just taken a new job with ESPN.

She issued a statement on Facebook after she was released from jail the next morning, taking full responsibility for her actions and apologizing to her friends, family and fans. In the aftermath, MINI USA withdrew her from its advertising.

She pleaded guilty, agreeing to enter a diversion program for first-time offenders that included treatment.

England’s hate crime law may be expanded to include misogyny