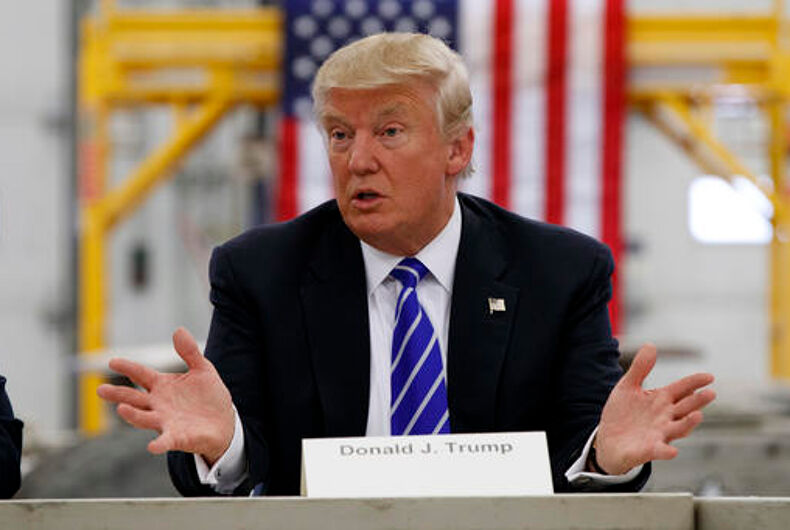 Donald Trump seems to have discovered some change you can believe in, and has just shuffled around the leadership of his campaign (again). Out goes Paul Manafort, who may or may not have been illegally accepting money from foreign powers, and in comes Breitbart News chairman Steve Bannon and conservative pollster Kellyanne Conway.

Well, you’ll be delighted (and no doubt shocked) to learn that Trump’s new best friends have a long history of homophobia. Surprise!

Bannon, for example, went nuts over Target’s inclusive bathroom policy, accusing the store of “trying to exclude people who are decent, hard-working people who don’t want their four-year-old daughter to have to go into a bathroom with a guy with a beard in a dress.” Good one!

Conway called homosexuality “corrupting” and said that people “don’t want their kids looking at a cartoon with a bunch of lesbian mothers.” She did a bunch of polling for the National Organization for Marriage, which unbelievably still exists. (In fact, just last week, NOM sent out a fundraising email in which they inadvertently called their own members “pathetic.” Truer words were never spoken!)

Conway also spoke at the Family Research Council’s Values Voter Summit, and said that opposing homosexuality is not “right versus left, but right versus wrong.”

Trump likes to pretend that he’s a friend to the gays, but a quick look over at the company he keeps proves that’s simply not true. And of course, running mate Mike Pence is even worse.

Under Bannon’s leadership, Breitbart has run headlines like “The Trouble with Trannies” and pushed a conspiracy theory that Matthew Shepard’s murder wasn’t a hate crime. The site has also claimed that being gay is a mental illness.