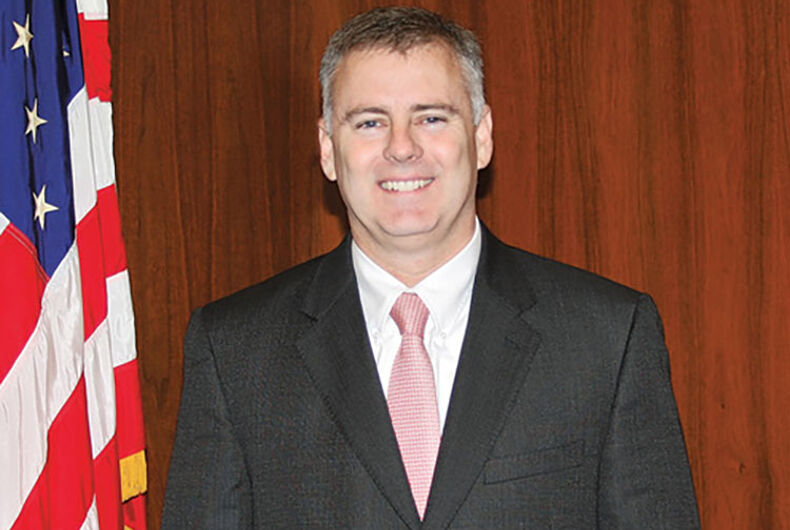 The night before many Texas schools reopened for the new year, a federal judge issued an injunction to the Obama Administration that blocks its nationwide guidelines on transgender students from taking effect, as NPR reported.

U.S. District Judge Reed O’Connor, an appointee of President George W. Bush in his waning days in office, is no friend of LGBTQ Americans. Before issuing this ruling on behalf of Texas and a number of other states that sued the federal government over its guidelines, O’Connor made a last-ditch effort to block equal marriage rights in March of last year, by handing down an injunction that blocked gay couples from medical leave benefits. He used a similar strategy in prognosticating “a substantial likelihood” that those opposing FMLA benefits would prove victorious, according to ThinkProgress.

This time, as BuzzFeed reported, Judge O’Connor’s gavel hammered away at the rights of trans students who were the subject of a memo from the Department of Education to schools across the country. The letter said they were to be afforded every right including the use of a bathroom, locker room, shower facility or access to gender-specific sports that corresponded with their gender identity. ‘

Nearly a dozen states filed suit to block enforcement of the letter, which threatened the loss of federal funds and possible action by the Department of Justice if the guidelines were not adhered to. At least ten more states, and in some cases governors acting without the help of their attorneys general, joined the cause against “federal overreach,” as opponents called it.

O’Connor’s decision hinges on the administration’s interpretation of Title IX of the Education Amendments of 1972, which require that schools receiving federal funding not discriminate against students on the basis of their sex.. The feds argued the use of the word “sex” in regulations implementing Title IX is ambiguous, but O’Connor was not convinced.

“It cannot be disputed that the plain meaning of the term sex as used in § 106.33 when it was enacted by DOE following passage of Title IX meant the biological and anatomical differences between male and female students as determined at their birth.”

O’Connor also found fault with the nature of the guidelines, dubbing them “compulsory in nature.”

His injunction orders all parties to “maintain the status quo,” which is to mean any school that does not allow trans students to use the bathroom matching their gender identity should continue to do so. O’Connor also forbid the administration from enforcing its now defunct guidelines, and is “enjoined from initiating, continuing, or concluding any investigation based on [its] interpretation that the definition of sex includes gender identity in Title IX’s prohibition against discrimination on the basis of sex.”

Even lawsuits are off limits, he wrote.

The news was cause for celebration by antigay Texas attorney general Ken Paxton:

I'm pleased the court has ruled against the Obama Administration's latest overreach. Here is my statement: pic.twitter.com/fKefvl8oIV

“The department is disappointed in the court’s decision, and we are reviewing our options,” said Justice Department press secretary Dena Iverson to BuzzFeed.

A joint statement by five civil rights organizations, including the American Civil Liberties Union and Lambda Legal, called the ruling “unfortunate and premature.”

Their statement called on the nation’s school districts to recognize “your obligations under the law have not changed,” and reminded them that other courts and lawyers can still legally rely on the Obama administration’s stated interpretation of the law.

An appeal of the injunction is expected.

The full injunction can be read at the link below.