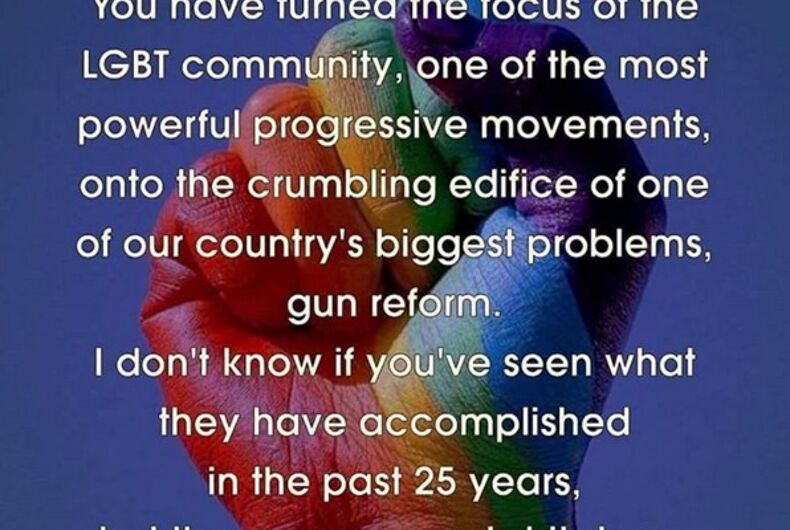 Following the mass shooting at an Orlando gay nightclub that left 49 dead and 53 injured, the LGBT movement is going to war against gun violence.

The internet has lit up in recent days with viral memes pointing out the recent success of the LGBT movement in accomplishing what was previously considered impossible. We’ve changed minds and hearts, repealed anti-LGBT legislation, fought off other discriminatory laws, gained the respect and cooperation of the business community, and made powerful political allies. Who better to take on the NRA and gun nuts who are ruining our country with a slavish devotion to hot lead?

Now 50 major funders and LGBT organizations are making it official in an open letter announcing their intention to fight for stronger protections against gun violence nationwide.

The Human Rights Campaign, the nation’s largest and most politically connected organization, did not sign on to the letter. Known for their reluctance to join a group effort they can’t lead, the organization instead put out a separate statement today saying they endorse “common sense gun violence prevention policy measures.”

HRC claims they are making “a significant policy announcement,” but in the end their “historic” position is nothing more than a rehash of what the other organizations announced the day before – but written as an incredibly long press release and a wordy “joint resolution” from the group’s board of directors.

The mass sign on letter is on page two. HRC’s stand-alone chest beating is on pages three and four.

Donald Trump asks gays: ‘Who’s your friend?’ and the responses are LOL

#AskTheGays: Trump’s America would be disastrous for LGBT people